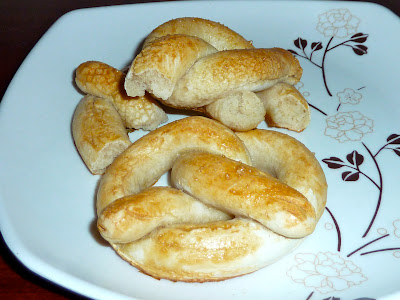 I had a craving for soft pretzels.  I think it was walking by Auntie Anne’s Pretzels at the mall that started it all.  It had been more than four years since I had a fresh soft pretzel and I wanted one now.
I looked up pretzel recipes on-line and found one for Auntie Anne’s type pretzels and one by Alton Brown.  My first try was a complete failure…the GF flours I had used were all wrong and the taste and texture were way off, more like a cake in texture and tasted like a pretzel flavored unsweetened doughnut, yuck!
A few days later I woke up with an ‘aha’ moment and I just knew what I had done wrong and which flours to use.  It reminded me of the story of the person who was working on the sewing machine and could not figure out how to make it work.  The thread kept breaking.  One night he dreamt about people carrying spears with a hole in the pointy end.  He woke up knowing he had to put the hole in the tip of the needle and voila, the sewing machine worked.
Not that pretzels are equal to sewing machines in their total affect on the world as we know it, but in my GF world this is big.
My second attempt was perfect, almost.  The pretzels tasted great, they were soft, had a great texture and the baked dough tore apart like regular dough.  I was so excited.  The only problem was that they did not get browned during baking and looked worm white.
A few days later I made them again so I could take photos for the blog.  To my disappointment this batch was too chewy.  These pretzels were much better than batch one, but worse than batch two.  This batch was chewy and dense with a strong pretzel flavor. They were good, but not the ones I had been craving.
So I made a fourth batch, after I figured out what I did differently.  What gives pretzels their pretzel taste is giving them a bath in baking soda and water.  Without the bath, they would just taste like baked bread dough shaped like a pretzel.  When I made the second batch of pretzels I had not boiled the pretzels, I had dipped them in the baking soda bath (Auntie Anne recipe directions).  The third batch was boiled for thirty seconds (Alton Brown’s directions).  The boiled batch tasted very much like the pretzels that are sold in NYC on street carts.  The dipped batch tasted like a pretzel, but had a milder pretzel flavor, more like Auntie Anne’s.
I preferred the dipped batch in texture, but something had to be done about their color.  I rolled a rope of dough and cut it into pieces and ran an experiment.  I dipped a row of pieces, I made six other rows of dough pieces and boiled each for different amounts of time: 5, 10, 15, 20, 25 and 30 seconds.  Then I tried brushing pieces in each row with different washes to see how they would brown in baking.  I brushed them with egg white; egg yolk; whole egg and oil (so I could make a Vegan version).  I found that dipping the pretzels gave them a softer texture that would brown lightly when brushed with any egg wash or oil, but would not brown at all without a wash.  When the pretzels were boiled they were chewier and denser and baked very dark brown even if not brushed with egg or oil.  The boiled pretzels had a stronger pretzel flavor also.
After taste testing each piece, I decided to only dip the raw dough in the baking soda bath and to brush them with a whole egg wash or, for a Vegan pretzel, with oil.
As I was craving the Auntie Anne pretzels and not the NYC vendor type, I also added brown sugar to the recipe to make them a little sweet.  Auntie Anne dips the warm pretzels into a melted butter bath after they are baked.  I did this with one and it was heavenly.  I also tried dipping one in the melted butter and then into a cinnamon sugar mixture.  Good, but too sweet for me.  Next, I dipped one in melted butter flavored with garlic and then into grated Parmesan cheese and fresh parsley (Vegans or Dairy-Free can use garlic oil and non-dairy gated cheese), very yummy.
I froze them once they were cooled completely and I have been warming them in the microwave as I crave them.  They are denser and chewier once cooled, but still a great soft pretzel in both taste and texture.  These definitely satisfied my cravings for an Auntie Anne type soft pretzel.

*Just wanted to shout out a thank you to a fellow blogger Allergy Warriors and Gluten Free Living who linked to this recipe on their blog.  This blog has some unique and interesting information about living with celiac disease and allergies. 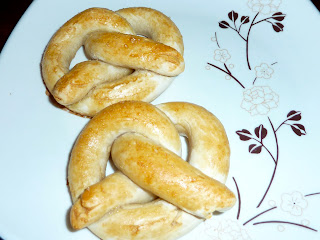 Directions
In the bowl of a stand mixer combine warm water, sugar, salt and yeast.  Let this sit for 10 minutes until the mixture foams.  (If this mixture does not foam there is a problem with the yeast and you must start over.  Check that the yeast did not expire, and be careful with the water temperature.  If the water is too hot it can kill the yeast.  Without yeast the dough will never rise and you will have very dense dough and tough to chew pretzels.)
Make a proofing box (see about proofing boxes on my Challah Bread blog post) by putting two cups of water into the microwave and turning the microwave on for 15 minutes while you make the pretzel dough.  Or, if no microwave, boil water and place it in a bowl and cover with a box large enough to cover both the bowl of water and the bowl of dough.  A clean plastic storage box is good for this.  Or, when dough is done, cover and let rise in a warm place.
In a medium sized bowl mix flours and xanthan gum until well combined.  Add this mixture to the bowl with the foaming yeast mixture and also add the butter or oil.  Using the paddle attachment, turn on the mixer to the lowest setting. Mix the dry and wet ingredients together until the flour is not going to fly out of the bowl when you turn the speed up to medium.  Mix the dough for five minutes on medium speed.
Clean and dry the bowl that the flour was mixed in and add about a Tbs. of oil to the bottom.  When the dough finishes mixing.  Gather the dough into a ball and place it in the bowl with the oil on the bottom.  Turn the dough ball over until all sides of the ball are coated with the oil.   Place the bowl with the dough into the proofing box (in microwave: do not cover bowl, do NOT turn on microwave) (in box, do not cover bowl with dough in it, make sure box covers both the bowl of dough and the bowl of boiled water). If no proofing box, cover bowl with dough and place in a warm place.  Let the dough rise until doubled in size, about 1 hour.
Turn dough out onto a cutting board or counter top.  Divide dough into 12 equal pieces.  Take one piece and cover the remaining dough with cloth or plastic wrap to keep it from drying out while working with each piece.
Roll each piece of dough into a rope about 12 inches long and form each rope into a pretzel.  First make a “U” with the rope then bring the ends of each rope down to opposite side crossing the dough.  twist the dough at the point where the dough crosses and then tap down on the bottom of the pretzel to form the traditional pretzel shape.
Once all the pretzels are shaped.  Dip each one in the baking soda and water mixture and then place them on a silpat or parchment paper lined baking sheet.  Place them back in proofing box and let rise again.
While they are rising, preheat oven to 450 degrees.
When pretzels have risen, brush with egg or oil wash and, if you like salt, sprinkle with coarse salt.  You can also sprinkle the pretzels with sesame seeds if you like.
Bake for 12-14 minutes or until lightly browned.  Cool slightly and then eat.   At this point you can dip them in butter and/or other toppings such as sugar and cinnamon or into garlic butter and then into Parmesan cheese and fresh chopped parsley.  Vegans and Dairy-Free can dip them in oil or melted Earth Balance Spread and then into cinnamon sugar.  Vegans or Dairy-Free can also dip them in garlic oil and then in Vegan grated cheese and fresh chopped parsley. Enjoy!
Newer Post Older Post Home
Subscribe to: Post Comments (Atom)