Posted by Bryna Bear aka Gluten Free Baking Bear
These scones are rich, tender and moist with a natural orange flavor and just enough chocolate chips.  The orange flavor is from both the grated zest from one orange and ½ tsp. of pure orange extract.
I used the recipe from my Lavender Scented Scones (minus the lavender) and used heavy cream in place of the milk.
I have noticed that measuring flour for bread or quick bread type recipes, like scones, is not the same as for cakes, pies or cookies.  Many bread recipes give measurements for the flour by weight (ounces, grams etc.) not volume (cups, tbs., etc.).  Now I know why…depending on how you measure out the cups you can have a lot more or less flour in the recipe.  This difference in amounts of flour can change the texture, moistness and consistency of breads, scones etc.  Some batches may be too dry, others too wet and heavy.  No I did not take the time to weigh out my flours after measuring them by cup, but I did measure out the tapioca flour differently on purpose. Somehow with tapioca flour the cup measuring is not as consistent as with the chickpea or sorghum flours.  I scooped the tapioca flour into the cup instead of spooning it in from the bag of flour. This gave the scone mixture a stiffer and easier to work with consistency without making the scones dry.  The other flours I measured out as usual, spooning the flour into the cup and then leveling it off.
When I was a teenager I lived in Denmark for a half a year with a Danish family.  I learned then that in Europe most baking measurements are done by weight. I brought home a kilogram scale and a deciliter cup to use with the Danish recipes I learned (I still have and use the scale and cup). There was one recipe for pancakes with beer that used a measuring cup.  I will never forget how shocked I was when my Danish “Mother” banged the cup of flour down on to the counter to compact the flour for measuring.  In the USA this is just not done.  Here if you want light cakes you spoon flour (sometimes sifted first) into the cup and level it off gently with a flat knife.  All flour is measured that way here.  I have been doing more bread baking lately and I find that it works better in bread recipes to weigh the flour out instead. 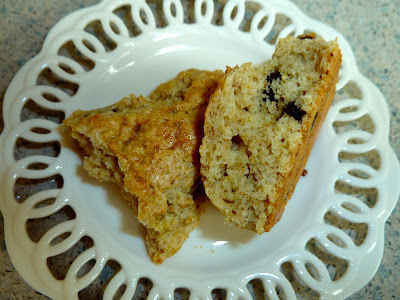 In a large bowl place the flours, baking powder, salt, xanthan or guar gum, sugar, and orange zest.  Stir together until well mixed.
If you have a food processor you can place all these ingredients into the processor and pulse a few times until well mixed.

If using a food processor put this mixture into a bowl and then continue with the next steps.

Make a well in the center of the flour/butter mixture and, all at once, pour the cream and chocolate chips into the well.

Stir the cream and chips into the flour/butter mixture with a fork until just mixed.  Do not over mix or the scones will be heavy and hard.

Turn the dough out onto a counter or cutting board covered with plastic wrap.

Gather the dough together into a circle and press together gently until it holds its shape.  The circle will be about 2 inches high.

Place the scones on a parchment or silpat lined baking sheet and let rise for about 15 minutes before baking.
Bake in center of the oven for 12-15 minutes (This batch took 18-20 minutes, I think it was because they were quite thick.  I covered them with aluminum foil so they would not get too brown with the longer baking time).
Serve warm or at room temperature.  They are best served the same day.
Freeze leftovers.  Thaw and/or reheat before serving.

These scones do not need butter, clotted cream or jam.  They are rich and sweet enough on their own. 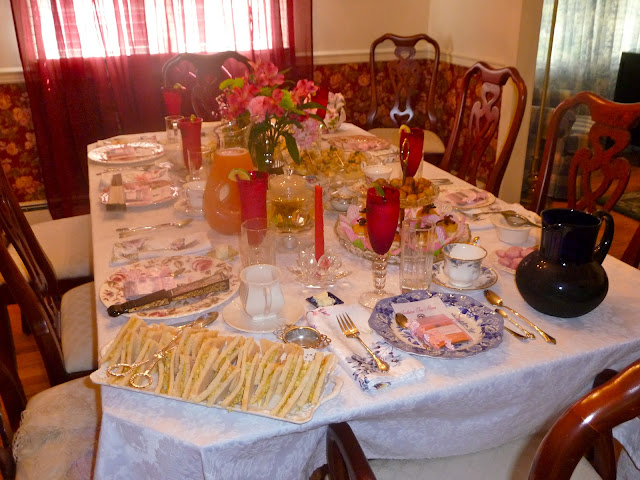 Yesterday seven of us had a lovely afternoon sipping Mint Juleps (virgin ones) and savoring shrimp and grits; broccoli and cheese quiches; cornbread with brie, apple and mushroom ‘bacon’; tea sandwiches and an endless array of desserts.  We bantered about southern expressions with our best southern accents, as best as Yankees can do Dixie.
It was great fun.  The hardest part of acting Southern was drawling slowly.  We are just at a very fast pace up here in the North and kept having to remind ourselves, and each other, to slow down.
The food was heavenly.  I made many things that I had never attempted before and some I had never eaten before.  Everyone loved and thoroughly enjoyed the meal.
I spent a few weeks reading Southern Cookbooks from the library and then created a menu for the Tea Party from the recipes that seemed typically southern and yummy.  I sort of adapted the Southern recipes to a Northern palate.
I will be posting the recipes over the next few weeks. On this post I will give directions for making the pink sugar ‘cubes’.
For dessert I made mini strawberry cakes with strawberry frosting; banana pudding with homemade vanilla wafers; orange chocolate chip scones; chocolate brownie cookies; buckeyes; and strawberries with whipped cream.  Again, I went overboard a tad with the sweets and no one could even try them all.  Doggie bags for all!
My friends made Mint Juleps, Jungle Juleps and Roasted Chestnuts (from the garden).  None of us had ever had a Mint Julep before.  They are really good!  No wonder they are popular in the South.  Quite refreshing on a hot day!  Jungle Juleps, from Disney World, are made from passion fruit, orange juice and mangos.  These are also very good on hot days.  I will get the recipes for these from my friend and post them.
We also had an assortment of hot teas.  We ate indoors and later sat out on the deck, I mean verandah, and sipped teas and laughed and talked (always with Southern accents).  We decided that the next Tea will be a Russian Tea.  My head is already churning with ideas: blintzes, borscht, caviar, hot tea in glasses…..
I sure enough hope that y’all enjoy and try my Southern Tea Recipes. 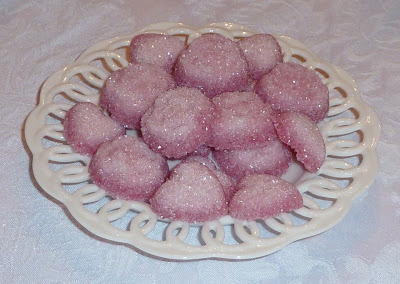 Ingredients
Directions
Mix water and food coloring into sugar and press this mixture into candy molds or ice cube trays with small holes.
Allow to dry for 24 hours before you unmold them and then allow the cubes to dry completely for a day or two.
Store in an airtight container. Posted by Gluten Free Baking Bear aka Bryna Bear
I had some extremely ripe bananas.  Though I do love banana bread, I just wanted to do something different with these bananas.
I have Betty Crocker’s Pie and Pastry Cookbook (copyright 1968) that was a gift from a high school classmate.  It is quite well worn, as evidenced by the covers that are separated from the rest of the book and the food stains all over the pages.  This book has served me well.  I learned how to make every type of piecrust, apple pie, pumpkin pie and many other pies from this book.  Back then I did not know that I was allergic to wheat and used the recipes as written.  Now I still use these tried and true recipes, but with GF flours and xanthan gum. One of the things I appreciate about this book is that all of the recipes are from scratch.  No “use a box of this mix” or “a can of that filling”, just how to make fillings, crusts and toppings with fresh ingredients.
The banana cream pies I made always had graham cracker crusts.  Now I make a cookie crust with gluten free cookies.  Next time I might use the tart crust recipe from the Peach Tart post on my Blog last month. The tart crust is a little more tender than the cookie crust; both recipes taste great.
The pastry cream I tried at the Culinary Institute GF baking class a few months ago was the best I had ever tasted; so I decided to use that recipe which is in the Gluten Free Baking with The Culinary Institute of America cookbook by Chef Richard Coppedge, Jr. (page140).
I served the pie at dinner with two friends and the leftovers were eaten at a meeting the next night.  Everyone loved this pie.  I especially enjoyed it, as it had been a long time since I made (or even ate) Banana Cream Pie.
I just whipped up some cream for the topping.  For a Southern take on this pie you could use meringue topping (and vanilla cookie crust). 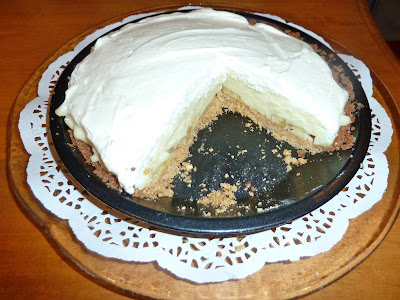 GLUTEN FREE BANANA CREAM PIE
From GFbakingbear.com
Crust
Ingredients
Directions
Preheat oven to 350 degrees.
Put all ingredients into a 9-inch pie pan and mix well (I use my hands).  Press crumb mixture down evenly and firmly along the bottom and side of the pan.
Bake for 10 minutes until edges are lightly browned.
Cool on a rack.
Filling/Custard
Ingredients

Directions
Mix together Egg Yolks, ½ cup Milk, ¼ cup Sugar and all the Cornstarch in a bowl and set aside.
In a saucepan put the remaining sugar first, then add the rest of the milk.  Bring to a boil over moderate heat.
To temper the egg mixture, add ¼ cup of the heated milk mixture to the eggs and stir.  Keep adding hot milk mixture to the egg mixture, ¼ cup at a time; stir well after each addition, until ¼ of the hot milk mixture is blended into the egg mixture.
All at one time, pour the egg mixture into the pan with the simmering milk mixture.  Whisk continually until it comes to a boil and begins to thicken.  Remove pan from heat.
Stir in Butter and Vanilla Extract.
Pour custard into a wide shallow baking pan.  Cover with plastic wrap and then press the plastic onto the surface of the custard. This will prevent a ‘skin’ from forming on the top.
Cool completely in refrigerator before using.
Stir custard after it is cooled to make it smooth before filling the pre-baked piecrust.

To Assemble Pie
Arrange Banana slices along bottom of piecrust.
Put custard on top of layer of banana slices and smooth with a spatula.  Be sure to cover banana slices completely with the custard to prevent them from turning color.
Top custard filling with the whipped cream.  Slice and serve.  You can garnish the pie with shaved chocolate if you wish.