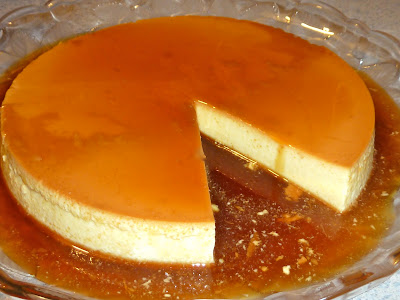 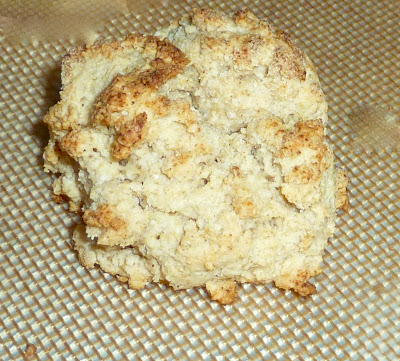 What to do with leftover eggnog?  I always seem to have a lot of regular ‘nog’ and ‘snog’ (soy or coconut eggnog) left over after the holidays.  In the past years, to use up these leftovers, I have experimented with replacing eggnog for the milk in recipes and adding some nutmeg.  This has proven very yummy and successful.
In this post I will share the gluten free recipes for Eggnog Biscuits and Eggnog Flan.
I made these Eggnog Biscuits last week and they were so good that I made them twice.  They are best served fresh and warm or reheated.  I did not yet make eggnog flan this year, but I do have photos of the regular flan that I will post along with the recipe for traditional and Eggnog Flan.  Eggnog Flan will look the same as Traditional Flan, but will be a bit more yellow.  I have experimented and tried to make Flan with non-dairy milk and it just didn’t work, so there is no dairy-free version for this recipe.  If anyone has been able to make it work with non-dairy milk please let me know how.  I prefer to flavor the traditional flan with only lime zest and NOT vanilla.  The lime zest imparts a subtle and wonderfully perfect flavor to the flan. 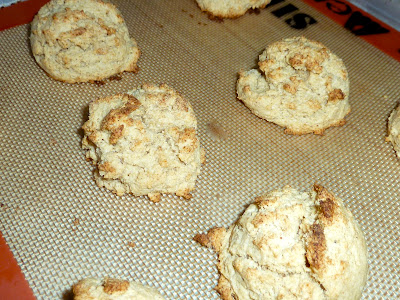 EGGNOG BISCUITS
Makes about 12 when using a 2" scoop.

Directions
Preheat oven to 450 degrees.  Line a baking sheet with silpat or parchment paper.
In a large bowl add flours, xanthan or guar gum, baking powder, salt and nutmeg (if using).  Mix well.
In the bowl of a food processor add butter/margarine and flour mixture and pulse until it looks like wet sand.
If you do not use a food processor add butter/margarine to the flour mixture in the large bowl and cut in butter/margarine with a pastry blender or two knives until it is the consistency of coarse meal.
If using a food processor, move butter flour mixture into the large bowl.
Add eggnog/non-dairy eggnog or milk/non-dairy milk to bowl and using a fork mix in the liquid until all the flour is wet.  Do not over mix or the biscuits will be hard and tough.
Using a scoop that is 2-inches in diameter, scoop out dough and place 2-inches apart on the prepared baking sheet.
Bake in pre-heated oven for 12-15 minutes.
Serve warm.  Reheat biscuits if serving them at a later time.
You can form the biscuits and freeze them on the baking sheet.  Then store the frozen biscuits in a plastic bag for later use.  Frozen biscuits may need a few more minutes of baking time. 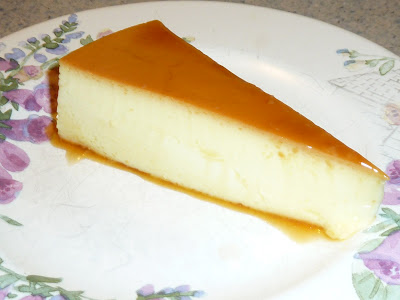 Directions
Preheat oven to 350 degrees.
You will need a round 9-inch pan that is at least 3-inches deep.  You can also use a bundt pan.
Place 1 cup of sugar in the pan and place the pan in the oven.  Keep checking on it and shaking the pan until the sugar is melted and golden.  Take care not to burn the sugar.  Swirl the liquid caramelized sugar around the sides and bottom of the pan.  Allow the pan to cool on a rack.
In a saucepan add eggnog/milk, 1 cup of sugar, salt and (if using) lime zest.  Bring rapidly to a boil and simmer for 15 minutes.  Remove from heat and cool.
In a bowl mix eggs.  If the milk is warm or hot, temper the eggs by adding ¼ cup of the milk mixture and stir in well, repeat adding ¼ cup of milk at a time until 1 cup of milk is used, then add the rest of the milk mixture all at once.  (If you do not temper the eggs by slowly adding the milk you will cook the eggs at this point and end up with sweet scrambled eggs.)
Pour the mixture through a strainer and into the caramelized pan.
Place the pan into a large baking pan that is filled with 1-inch of hot water.
Place in oven and bake for 1 hour.  Do not bake more than 1 hour or the flan will be tough.  The flan should jiggle when you take it out of the oven and it will firm up after chilling.
Remove flan pan from the water immediately and cool on a rack.  When room temperature cover and place in the refrigerator until ready to serve.
When ready to serve, place a large plate (with a lip) over the top of the pan.  There will be liquid from the caramelized sugar so a lip on the plate is needed to keep the liquid from spilling out.
Carefully hold the plate on top in one hand and the pan of flan in the other.  Flip them over so that the plate is now on the bottom and the pan with the flan is on top.  Allow the flan to fall onto the plate and then carefully remove the pan.
Cut into slices and serve with a spoonful of the caramel liquid.