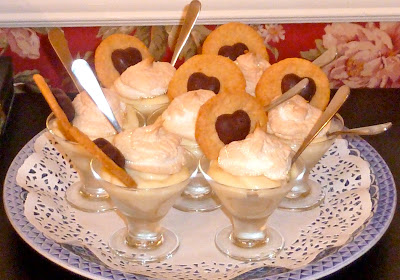 For the Southern Tea Party I served Banana Pudding, a delicious and typical Southern dessert.  To make it gluten free I baked the Vanilla Wafer Cookies myself and used the previously posted recipe for vanilla custard from my Banana Cream Pie recipe. The vanilla cookie recipe is one I converted to GF from a Taste Of Home recipe.  They are not identical to Nabisco Vanilla Wafers in texture, but have a rich vanilla taste.
Typically Banana Pudding is made in a large baking dish. The meringue is then spread over the pudding before lightly browning the meringue in the oven. Sometimes, for individual servings, it is made in heatproof dishes or glass canning jars so the meringue can be baked.
To make a dainty and neat presentation for a Tea Party I made individual servings in pretty glass cups.  Since these cups were not heatproof, I baked the meringue separately before placing it on top of the pudding.  I also deconstructed the pudding and used the cookie on top for a decorative touch instead of placing them in the bottom of the cup.  With the extra chocolate from the Buckeyes I made chocolate hearts in a chocolate candy mold and used these as accents on the cookies.
The vanilla pudding absorbs the flavor of the bananas and it is just delicious.

Directions
Preheat oven to 350 degrees.  Prepare baking sheets by lining them with silpat pads or parchment paper.
Cream butter and sugar until light.  Add egg and vanilla and mix until fluffy.
In a separate bowl add all the flours, salt, baking powder and xanthan gum and mix with a whisk until well combined.
Add the flour mixture to the egg butter mixture and mix until all the flour is incorporated.
Using a scoop that measures 1-inch across or with a teaspoon, place dough 2” apart on the lined baking sheets.
Bake 12-15 minutes until the edges are golden brown.
Cool on a rack and store in a tin or airtight container.  Best eaten within 3 days.
Raw dough can be frozen and baked at a later time.

Directions
I referred to this great article on making the perfect meringue.  These detailed instructions by Linda Stradley of What’s Cooking America are clear and tell you everything you need to make meringue correctly.
Whip egg whites on high speed of mixer until frothy then add the cream of tarter.
Continue whipping until the eggs are opaque.  With the mixer running, add the sugar a tablespoon at a time.
Add the vanilla.
Stop beating when soft peaks form.

Instructions for making Banana Pudding for a Tea Party - as pictured.
Preheat oven to 350 degrees.
Make meringue and place in a pastry bag with a plain 5/8” round tip (Wilton #12).  Pipe out pretty cone shaped mounds of meringue onto a silpat or parchment paper lined baking sheet.  Make the bottom of each mound the size of the top of the glass you will put the pudding in.  Make enough for each cup and a few extra mounds of meringue in case of damage while removing them from the baking sheet.  If you do not have a pastry bag and tip, spoon out clouds of meringue and form them into a peak with a spoon.  Bake for 15 minutes or until the meringue is lightly browned.  Remove from the oven and let cool.
Line the bottom of each glass with banana slices.
Top with a scoop of cooled pudding/custard (with this presentation, the pudding can be made a day ahead and chilled).
Place a mound of baked meringue on top of the pudding.
Place a cookie in each cup.
I had some chocolate left over from making Buckeyes so I made chocolate hearts with them in a candy mold.  I placed the chocolate hearts in front of each cookie in the cup.  You can buy some chocolate hearts or just leave the cookies plain.

Instructions for making the Traditional Southern Banana Pudding in a baking dish or heatproof glass bowl.

Pour a thin layer of hot/warm pudding onto the bottom of the 1 ½-quart baking dish or heatproof bowl.  It looks pretty in a clear glass dish or bowl.  Line the bottom and sides of the dish with a layer of vanilla wafers. If you use a clear glass dish, place the cookies with the tops facing the side of the bowl so it looks prettier; otherwise it really doesn’t matter which way they face.  Then top with a layer of the sliced bananas.  Pour 1/3 of the hot pudding over the bottom.  Make a layer of cookies, then bananas on top of the pudding.  Pour another 1/3 of the hot pudding over the cookie and banana layer.  Make another layer of cookies and bananas.  Pour the rest of the pudding on top.  Allow to sit for at least 15–20 minutes to allow the pudding to soak into the cookies.  If you don’t feel like making the layers you can just mix up the bananas and cookies ( into the pudding and pour into the baking dish.
Make the meringue.  Spread the meringue over the top of the pudding.  Spread the meringue all the way to the sides of the dish so that the pudding is sealed in.  Use a spoon to make pretty swirls on top of the meringue (optional).
Bake in the preheated oven for 15-20 minutes or until the meringue is lightly browned.
Serve at room temperature.