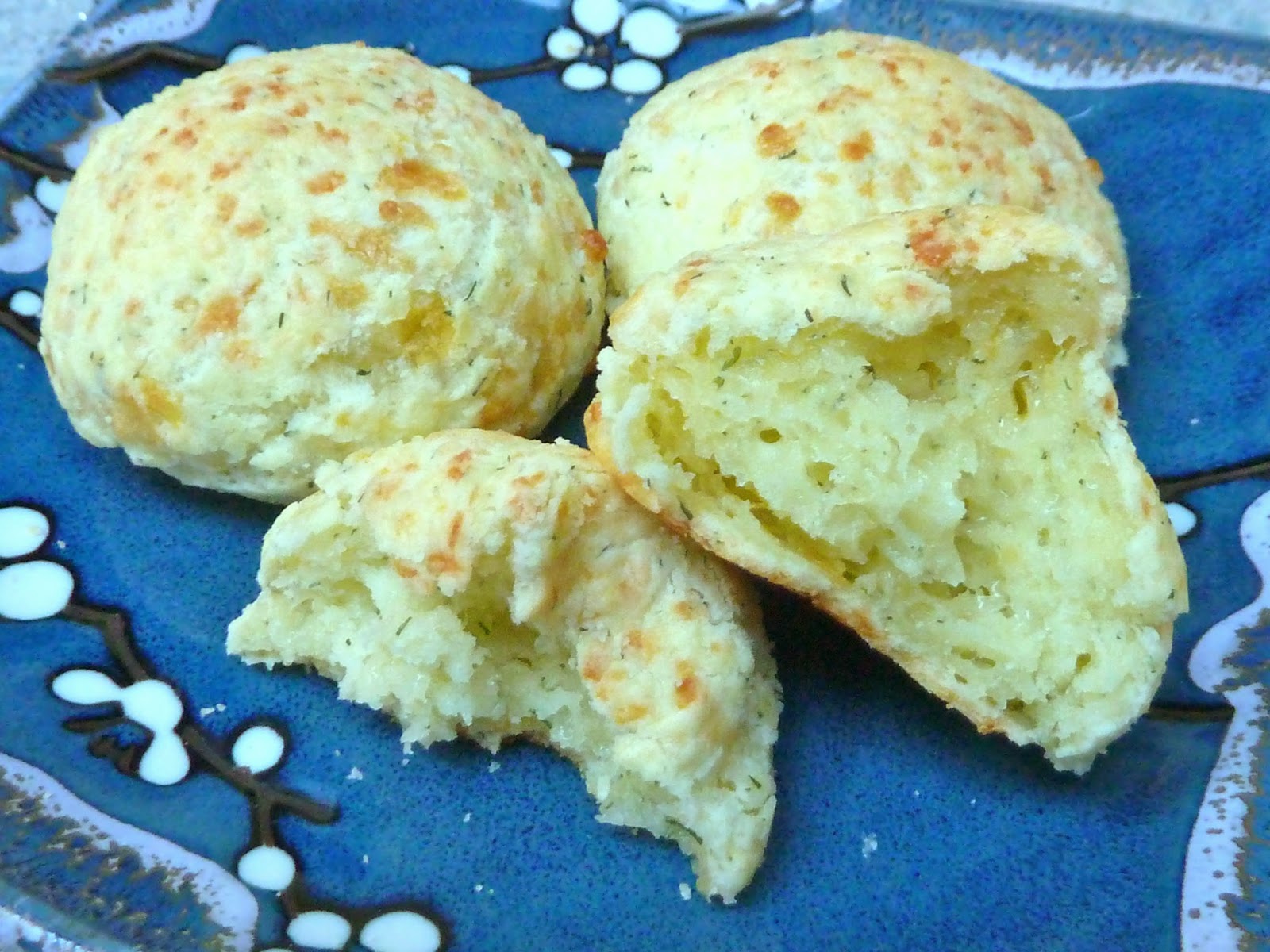 I had been hearing murmurings about Brazilian Cheese Bread also known as Pâo de Queijo or Chebe rolls .  I found some recipes and tried two. OMG delicious! I could not believe how easy and fast it was to make fresh rolls that actually taste like ‘real bread’. Depending upon how fast you can measure out ingredients, you can have fresh baked rolls in 20-30 minutes, start to finish. The original Brazilian recipe is made with tapioca flour so it is naturally gluten free if you use certified gluten free tapioca flour. I am in bread heaven.
I tried a traditional Brazilian recipe and one from Gluten Free Gobsmacked’s blog. I love Gluten Free Gobsmacked’s blog.  I made her croissants a few years ago and they were amazingly delicious and had a great texture.  Since making those croissants I trust her recipes.  I am good at baking cakes, cookies, pies, etc., but bread is more difficult for me to convert into a gluten free version.  Why reinvent the wheel?  If someone has already made a great gf version why not use it?
The traditional recipe was similar to a French gougére recipe where you heat the dough in a pot and then add the eggs.  In the comment section a woman from Brazil gave the same recipe, but said that they don’t bother cooking the dough on the stove first.  Just blend all the ingredients in a blender and bake in a mini muffin pan.  Simpler sounded easier and better to me so I tried the blender method.  The results were good but the center was a bit too ‘doughy’ for me.
Gluten Free Gobsmacked’s recipe is also simple, but no milk and you make it in a mixer.  I liked this recipe the best for taste and texture.  The results were less ‘doughy’ inside and the flavor was superior.  I don’t know what the real bread is supposed to be like, but this will be my go to recipe and the one I will post on the blog.
I made this recipe many times changing the amounts of butter and cheese; changing the type of cheese and adding various herbs and spices.  I also tried a dairy free version which, by the way, is just as good as the one with real dairy.  Once I forgot the butter all together, still great just a bit drier and less stretchy.
If you add some garlic powder and parsley and use cheddar cheese they are reminiscent of Red Lobster’s cheese rolls.  If you use a mild mozzarella cheese they are like the rolls from Bertucci’s.  Or, at least, they are what I can remember those two types of rolls are like.  Really, trust me, they are close enough and really good.  No one will know or care that it is gluten free.
If you use the entire amount of cheese and butter in the recipe the rolls will be a little dense, moist and will pull apart and stretch a bit when warm.  If you use half the cheese and or leave out the butter or oil completely they will be a little drier and lighter, but will still pull apart when warm, just not as stretchy and moist as the full throttle version.
These are best eaten when warm out of the oven.  You should reheat them if using them the next day or so.  Once cool they tend to be dry and stiff. The original texture is restored when they are warmed up. 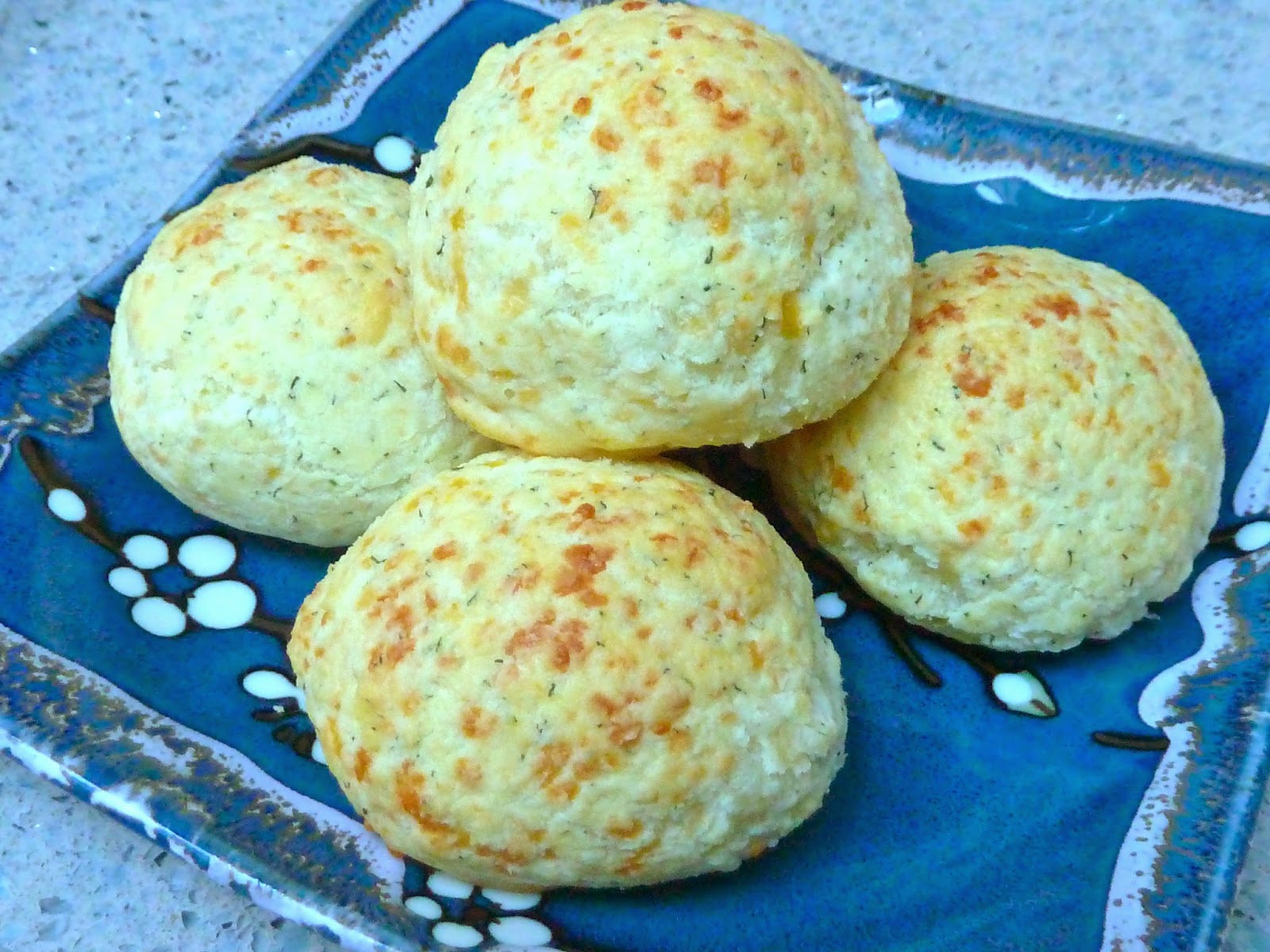 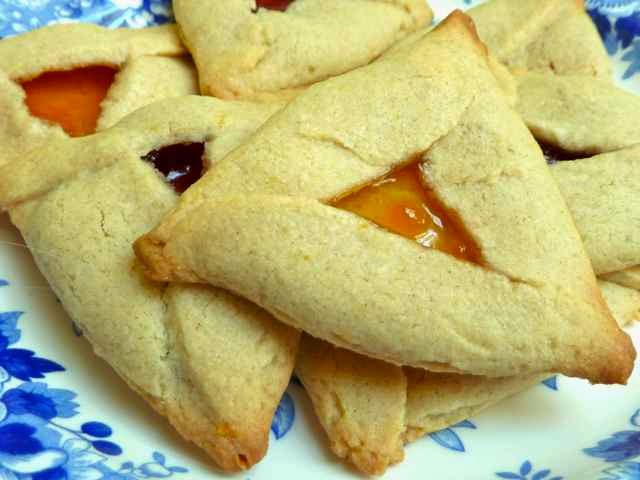 Hamantaschen are triangle shaped cookies typically made for Purim.  Purim is a Jewish holiday that commemorates the salvation of the Jews in Persia about 400 years BC.  Some of the things you do to celebrate this holiday are reading the Book of Esther or the megillah (This is where the expression the ‘whole megillah’ comes from as this is a long story.); giving money or food to the poor and to whomever asks; sending food to a friend (preferably via a child or other person); and having a celebratory feast. Hamantaschen means ‘Haman’s pockets’.  Haman is the villain in the story of Esther.
There are many recipes for this cookie.  Some dough comes out soft, some crisp, some is made with yeast and is more like bread or pastry.  The dough is filled with many things, most typically with preserves of apricot, raspberry & prunes; poppy seeds; nuts and chocolate.  The dough in this recipe is soft and cookie-like.  For a filling I used apricot, raspberry and plum preserves & jams that I had on hand. Oddly enough, even though my motto is everything is better with chocolate, I like these best with fruit preserves.
With the vegan version, the dough was softer and more difficult to work with and shape than with the butter and egg version.  Instead of rolling out the vegan dough I chilled it, scooped out portions, rolled it into a ball and flattened the ball with a flat bottomed cup.  I wrapped the cup bottom in plastic wrap to keep the dough from sticking to the cup. This worked nicely.  I also flattened the cookie dough into circles directly on the baking sheets to keep them from losing their shape while trying to transfer them.
Some people prefer to make the triangle shape by pinching the corners together.  This never works well for me, the corners usually open during baking and the filling comes out.  So, I prefer to use the folding the dough over method and then I gently press the dough together at the corners.  This works much better, but some cookies will have jam breaking out no matter what.  Do not make the dough too thin, 1/4 inch or a little more is best to make intact cookies.
After shaping the cookies, be sure to chill them again for an hour before baking, so that they will hold their shape better.  Often with gluten free dough baking techniques and methods have to be adapted to make up for the differences in the dough textures. 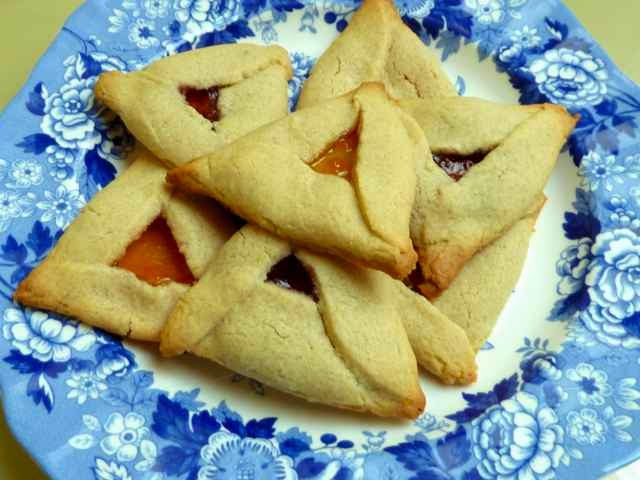 
FILLING
Preserves of choice, I used store bought apricot, plum and raspberry. You will need about 1-1 1/2 cups of filling.
You can also make prune and other fruit from scratch, chocolate or poppy seed filling. 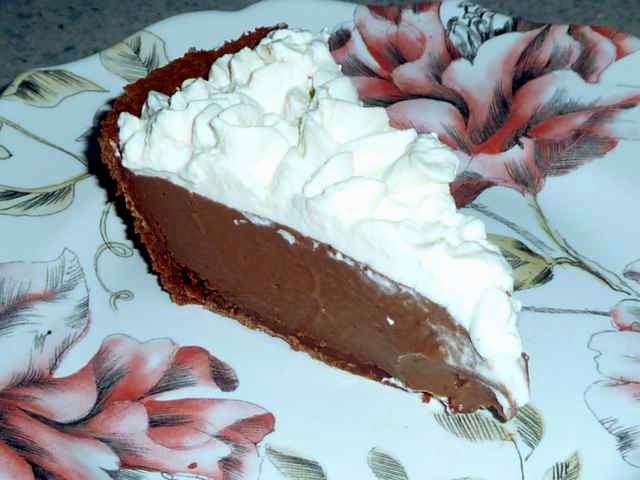 Creamy, chocolatey, rich and luscious Chocolate Cream Pie. I had been craving chocolate pudding and decided to make a cream pie since I had an empty chocolate cookie crust that was impatiently waiting to be filled.
A friend asked me for a gluten free chocolate cookie crust recipe. The saying goes “Why reinvent the wheel?”  So I started by converting a (wheat) recipe I found on line that all the reviews raved about. It came out very tough and hard and gritty from the sugar not dissolving.  So I then turned by sights to my favorite cookie crust recipe.  My gluten free shortbread cookie crust is easy to make, holds together well, is tender and delicious.  I replaced some of the flour with cocoa and then increased the sugar.  The dough looked wetter when mixed than the non-chocolate crust, but came out with a wonderful texture and taste.  Then I decided to make a vegan pie so that my son could also have some pie.  For the vegan crust I replaced the butter with margarine and omitted the salt.  Of course, if you prefer, you can use a non-chocolate shortbread crust or any pie crust of your choice.
The dairy pudding recipe has eggs so for a vegan version I used the vegan mousse recipe from my French Tea Party for the filling. For a dairy free pie I would have made the filling just like the dairy filling, but replacing the milk with a nondairy milk like soy or almond.
Traditionally a chocolate cream pie has whipped cream on top.  I followed tradition. For the vegan or dairy free pie I made coconut ‘whipped cream’.  Often coconut whipped cream gets soft, loses its shape and begins to dissolve once it reaches room temperature. I used coconut cream instead of coconut milk.  Coconut cream has more of the solids from coconut milk and much less of the liquid. I also added a small amount of xanthan gum to the coconut whipped cream to make it thicker and to hold its shape better.  This worked like a charm.  The ‘whipped cream’ held its shape at room temperature and in the refrigerator until the final piece was eaten the next day. 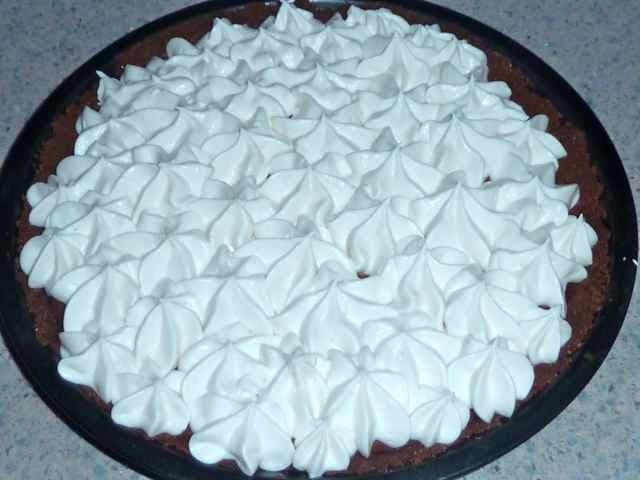 FILLING
*You can use 2 squares/2 oz. of unsweetened chocolate instead of the cocoa and butter (oil or margarine).