Homemade fresh éclairs are so much better than any bakery ones I ever tasted (except in France).  I had the idea for eggnog filling as a way to use leftover eggnog from the holidays.  The regular pastry cream is delicious and the eggnog cream is wonderfully different and just as good as (or better than – in some people’s opinion) the regular cream.  I thought that a nutmeg vanilla glaze would go better with the eggnog filling than a chocolate one, but I was wrong, they are both really good.
Although I had not had an éclair in five years, I did not get a hankering for one until recently.  Well, actually, I probably wanted one before this, but I thought it would take a really long time to make them.  As I found out, it does not take much longer than baking a cake.
I was a little afraid to try making the pastry or pâte à choux, since I never made this before.  It was so much easier than I imagined.
The first batch that I made with butter came out perfectly.  For the second attempt I used half olive oil and half Earth Balance non-hydrogenated margarine.  Even though I made a few mistakes in technique these also came out great. (I did not remember as well as I thought from the previous week and did not review the directions before making them again...won’t do that again.)  The pastry recipe is very forgiving.
Both the dairy and non-dairy pastry creams were flavorful and delicious.  The two eggnog cream fillings were indistinguishable from each other, but with the two regular creams I could taste a difference. The richness and flavor of the butter and milk in the pastry cream is to die for.  I could also tell a little difference between the two pastries.  The butter recipe was, for me, a little more wonderful…there is just something about the taste of butter that I love.   According to my friends who eat wheat, both pastry batches were identical to a wheat version.
I froze the few leftover ones.  They were really good after thawing at room temperature for a half hour, though not as perfectly crisp as when they were fresh the first day.  The pâte à choux tends to get soggy, so it is best to fill the pastry just before serving.
Now that I have made this recipe twice, I will definitely make it again if I get a craving for an éclair. 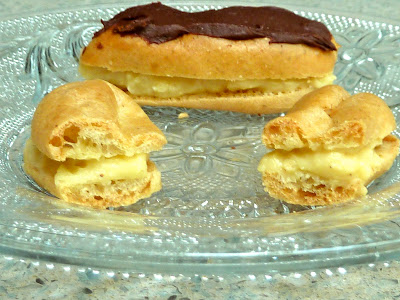 PASTRY CREAM
See the recipe and instructions for the Pastry Cream on my Banana Cream Pie post.
EGGNOG PASTRY CREAM
Ingredients
Please note that there are differing amounts of ingredients depending upon the type of eggnog used.  I found that the non-dairy eggnog I used tasted sweeter than the regular eggnog and it also had a stronger nutmeg flavor so less sugar and less nutmeg was needed.  Taste the Eggnog you are using and adjust the sugar and nutmeg to your taste.  To be safe, you can make the pastry cream recipe without the sugar and nutmeg and then add the sugar and nutmeg to taste at the end.

Directions
In a bowl mix the egg yolks, cornstarch and ½ cup of the eggnog (or non-dairy eggnog).  Set aside.
In a saucepan heat the rest of the eggnog and the sugar (OR you can wait until the pastry cream is done and then add the sugar to taste) over moderate heat.  Bring the mixture to a boil.
Add about ¼ cup of the hot milk to the egg mixture and whisk in well.  Continue to add ¼ cup of eggnog at a time to the egg mixture until about 1 cup in total is added.  This is to temper the eggs.  If you add the hot milk all at once you will have scrambled eggs.
All at once add the tempered egg mixture to the hot eggnog in the saucepan.  Stir and cook over moderate heat until the pastry cream comes to a boil and begins to thicken.  It will continue to get thicker as it cools.  Remove the pan from the heat.
Stir in the butter or margarine/oil and vanilla.  At this point you can adjust or add the sugar and nutmeg to taste.
Pour the hot mixture out onto a large baking sheet with a rim and allow to cool completely.  You can speed up the cooling process by placing the pan in the refrigerator.

Directions
Preheat oven to 425 degrees.  Place oven racks in upper and lower thirds of oven.
Line baking sheets with silpat or parchment paper.
In a bowl mix flours and xanthan or guar gum until well combined.
In a saucepan heat water, butter or margarine/oil, salt and sugar.  Bring to a boil and remove immediately from the heat.
All at once add the flours and mix in with a wooden spoon until well combined.

Return the pan to the stove and cook over medium high heat, stirring constantly, until the dough forms a ball,  pulls away from the sides of the pan and a thin film is formed on the bottom of the pan.  This will take less than three minutes.  Remove from the heat.

Place the dough in the bowl of an electric stand mixer and beat on low to cool it down, about a minute.

Add eggs, one at a time.  Mix in each egg on medium speed until it is well incorporated into the dough.  When done, the dough should form a peak when pinched between your fingers.  The dough should also be smooth and shiny.  If a soft peak does not form add a little of the egg white and mix in.  Add more egg white a little at a time and mixing well after each addition until the dough forms a soft peak.

Place the dough in a pastry bag fitted with a ½-inch wide plain tip.  Pipe out lines of dough 3 ½ inches long and 1 ½ inches apart.  The dough will double in size, so be sure to leave space between each line and along the pan edges.  Use wet fingers to smooth out the tops.

Bake in the oven at 425 degrees for 10 minutes.  Then turn down the oven to 350 degrees.  Bake an additional 25-30 minutes or until the pastries are golden brown.  Cool completely on a wire rack.

CHOCOLATE GLAZE
I used leftover glaze from my Chocolate Cake recipe.  The following is a recipe for éclair glaze from Food Network.
Ingredients

Directions
Heat cream/non-dairy cream in a small saucepan.  Remove from heat.  Add the chocolate chips.  Allow to sit for about a minute and then stir until smooth.

Directions
Mix all the ingredients until smooth.  Add more water if too thick.  Add more sugar if too thin.  If you want it to be less sweet replace some of the sugar in the recipe with cornstarch.

PUTTING IT ALL TOGETHER
MAKING THE ÉCLAIR
Put pastry cream into a pastry bag or a plastic storage bag.  Cut an opening about ½ inch wide.
Slice each pastry in half and then pipe a line of pastry cream (regular or eggnog) onto the bottom half.
Dip the top of each top half of the pastry into the chocolate or nutmeg glaze. Then put the dipped pastry top, chocolate side up, on top of the cream filled bottom half.
Arrange éclairs on a tray and allow the glaze to set by chilling them in the refrigerator for about an hour.
Enjoy!