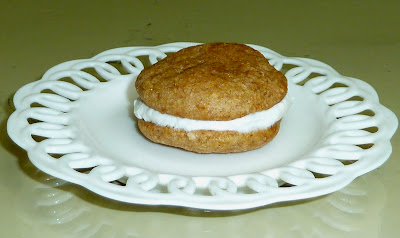 Whoopie pies are two small dome shaped cakes sandwiched together with a creamy or gooey filling.   I think they were originally made from extra cake batter.  Legend has it that when Amish husbands would find one of these treats in their lunch boxes they would shout “Whoopie!” as an expression of delight.
I remember having Whoopie Pies in Pennsylvania Dutch country when I was a child.  I loved the small cream filled chocolate cakes and the marshmallow filled chewy oatmeal ones and I still do.  Loving everything banana, I decided to make Banana Whoopie Pies this week, gluten free, of course.
I used the Martha Stewart recipe and converted it to gluten free.  After making and trying both peanut butter and cream cheese fillings I found that I preferred the cream cheese one.  The cream cheese balances out the sweetness of the cake and goes well with the banana flavor.
There were three batches, one Vegan, one traditional and one low fat and lower sugar.  For the low fat and low sugar version I replaced the butter with applesauce in equal amounts and used half sugar and half Stevia to sweeten them.  The taste was equal to the other versions, but the texture was more bread-like than cake-like.  The batter did not spread while baking like the others so they remained a scooped out round instead of a low dome shape.  Next time I would flatten them before baking.  I’m sure you can replace all the sugar with Stevia and have the same results.  I think that if you used full fat and Stevia the result would be more like cake than bread, but would come out smaller than the regular recipe.
All three versions went through a taste test and passed with a unanimous score of Yum!

Directions
Cake
Preheat oven to 350 degrees.  Line baking sheets with silpat pads or parchment paper.
In a bowl add flours, xanthan gum, salt, baking soda, baking powder and salt.  Mix well.  Set aside.
In a small bowl mash banana and add sour cream or yogurt.  Mix well. Set aside.
In a large bowl or in the bowl of an electric mixer beat the butter or margarine and sugar until pale and creamy.  (If using applesauce this beating will not be necessary just add the sugars, egg or egg replacer, and vanilla and mix well.)
Then add the egg or egg replacer and vanilla and mix until well combined.
Add half the banana mixture, mix in; then add half the flour mixture and mix in.  Repeat with the remaining banana and flour mixtures.
Using a scoop that measures 1 ½ inches across scoop out batter 2-inches apart onto prepared baking sheets.  I made 42 small cakes from the batter.  The low fat and low sugar batter will yield about 36 small cakes.  You will need to flatten out the low sugar batter to get the traditional domed shape of a Whoopie pie.
Bake for about 12 minutes or until the edges are golden brown.  Leave the cakes on the silpat liner or parchment paper and transfer to a wire rack to cool.
Filling
Place all the ingredients into a bowl and mix with an electric mixer until light and fluffy.

Assembly
Spread about a tablespoon of filling onto half the cakes.  Top with the other half of the cakes to make sandwiches.  Serve that day.
Store leftovers in the refrigerator for two or three days.  Freeze Whoopie Pies when freshly made to store for a longer time.  Thaw at room temperature for about an hour when ready to eat.