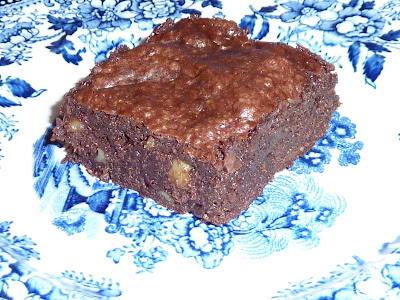 These brownies are perfectly decadent.  So rich and chocolatey with a fudgy melt-in-your-mouth texture and a gentle hint of bananas.  We had some when they were still a bit warm and let me just say that the whole batch could have been eaten in one sitting by three people if we did not pause to think and take some control of ourselves.
I based the recipe on a Minnesota State Fair winning recipe that I found on Cookie Madness’s blog.  As usual, I converted it into a gluten free version.  I made the first batch using oil in place of melted butter for my dairy free friends.  I made the second batch with melted unsalted butter.  They were both amazing.  The oil version was a bit moister and fudgier, but this could be due to the temperature of the oven more than the oil.  I am still getting used to baking in the new home with a new (to me) oven and though the oven thermometer said it was the correct temperature when I put the brownies in, by the time I went to turn them half way through the baking time, the oven temperature had dropped by ten degrees.  With gluten free baking a hot enough oven is crucial to cooking baked goods inside and out.  If it is not hot enough you do not get the correct rise and the center stays a bit dense.  With fudge-like brownies this denseness is not a problem, with a cake it can lead to a sink hole in the center and a very “off” texture (with bread you get a raw or paste-like center).
One other observation that could be helpful is about the chocolate.  I ran low on semisweet chocolate with the second batch.  When I searched on line for information, the baking sites stated that bittersweet and semisweet chocolate could be used interchangeably.  My bittersweet chips were 85% chocolate and a taste of the batter indicated to me that I needed to add more sugar.  I ended up adding about 1 Tbs. more sugar per each ounce of bittersweet chocolate that I used to replace each ounce of semisweet chocolate.  In the end, the brownies in which I used the larger amount of bittersweet chocolate tasted a bit different, a bit more bitter, but still delicious.
If you want brownies to cut perfectly (no crumbly edges) or into very small pieces, chill the brownies first.  Some people freeze them and then slice them with a serrated knife.  I know I could have done this for perfect looking pieces to take photos of, but my friends popped by just as they were cooling down.  We waited as long as we could, chatting while sitting in a house filled with the irresistible aroma of fresh baked brownies.  OK, the warm brownies stuck to the knife, but they were to die for.
I love fudgy brownies.  If a brownie is cake-like then it is a cake and not a brownie.  I love brownie cakes too, but I refuse to call them brownies. 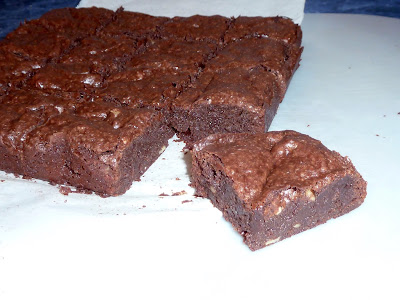 Directions
Posted by Bryna Bear at 7:34 AM