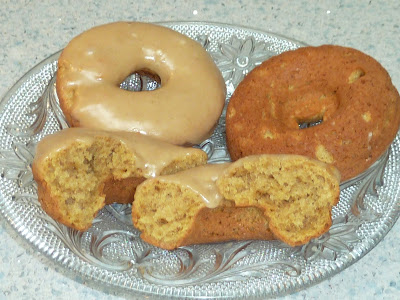 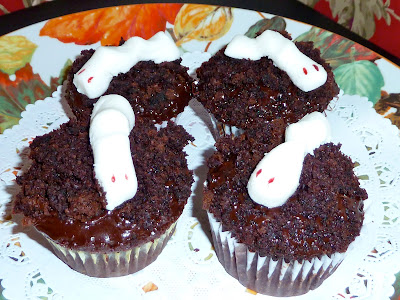 Posted by Bryna Bear aka Gluten Free Baking Bear
These baked Pumpkin Spice doughnuts are perfect for the autumn season.  These are flavorful and moist with the perfect doughnut denseness. The worms in dirt cupcakes are made from the recipe on my Chocolate Cake post.
I invented the doughnut from a regular vanilla cake recipe I found on-line.  I have been trying various vanilla cake recipes to find the perfect one to make for my friend’s daughter’s wedding.  I will be making a small two-layer wedding cake for the GF guests.  This recipe looked great in the photos, but the texture turned out differently than it looked with GF flours.  Not good for a wedding cake, but perfect for doughnuts.
I will also give instructions for vanilla doughnuts in case you are not crazy about pumpkin and spice ones. (My sister says she doesn’t like pumpkin at all, but she took one taste and then ate the whole thing.)
These are baked in doughnut shaped pans and not fried like regular doughnuts.  The brown butter glaze is amazing.  I am with Julia Childs with the butter thing…”If you're afraid of butter, use cream.”  Nothing tastes so wonderful as butter in baked goods.  My son is Vegan, so I make most things in a dairy-free and egg-free version.  Please, if you have no dairy restrictions, try the brown butter glaze! 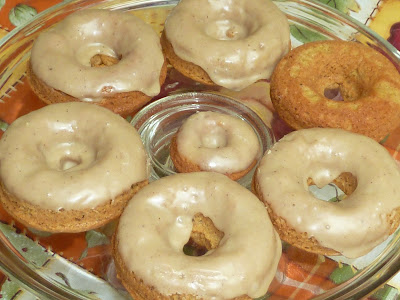 Directions
Preheat oven to 350 degrees.
Grease doughnut pans.  Recipe will make 12 large doughnuts and 6 small ones.
In a medium sized bowl add flours, spices, xanthan or guar gum, salt and baking powder.  Mix with a whisk until well blended.
In a separate bowl or the bowl of a stand mixer cream sugar and butter or margarine until fluffy.

In a separate bowl add eggs or egg replacer; vanilla; milk or cream or non-dairy milk; and pumpkin puree (or extra milk for vanilla doughnuts). Mix until well blended.
Add the flour mixture alternately with the egg mixture to the creamed butter and sugar.
Beat until well blended and smooth.  Be sure to scrape down the sides of the bowl half way through.

Bake in the center of the oven for 20-25 minutes until cake springs back when touched lightly with a finger or when a toothpick inserted in the thickest part comes out clean.

In a small saucepan, heat butter over medium heat.  Stir occasionally until butter gets light brown in color, about 10 minutes.  Remove from heat and pour butter into a bowl.  Leave burnt sediment in the saucepan.

Add sugar, vanilla and milk to the browned butter and stir until smooth.  I like to use a small whisk to do this so that there are no lumps of sugar.  Use the glaze right away or it will get firm.  You can reheat it by putting it in the microwave for 20-30 seconds or by heating the bowl of glaze in a bowl of water over hot water until it is runny again.
Place a rack on a sheet pan or piece of wax paper to catch glaze drippings.
Dip top half of each doughnut into the glaze and then place the doughnuts on the rack and allow the glaze to set.

Directions
Add all ingredients in a bowl and mix with a whisk until smooth.  Add more milk or sugar as needed to make the consistency you prefer. This recipe makes a thin ‘see-through’ glaze.  For a thicker glaze add more sugar until spreadable. 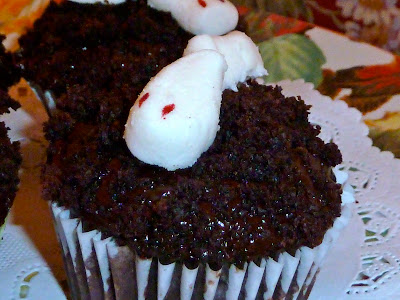 WORMS IN DIRT CUPCAKES
DIRECTIONS
Make one recipe of Chocolate Cake with Chocolate Glaze found on a previous blog post.
Sacrifice 2 or 3 un-iced cupcakes by removing the paper liner and crumbling them into a bowl.  The cake crumbs (dirt) should be no larger than small lumps of cake.
Dip remaining cupcakes one at a time into the chocolate glaze and then into the cake crumb dirt.  Set on a plate or rack to set.  If you run out of crumbs, crumble additional un-iced cupcakes as needed until all the cupcakes are glazed and dipped in the cake crumbs (dirt).

Using a kitchen food scissors, cut marshmallows (use vegan marshmallows for vegan cupcakes) half way up the center.  Then bend the marshmallow (worm) flat and place onto the cupcake topped with cake crumbs (dirt).
Make eyes on each ‘worm’ by dipping a toothpick into natural red dye and dotting the dye where you want the worm eyes.