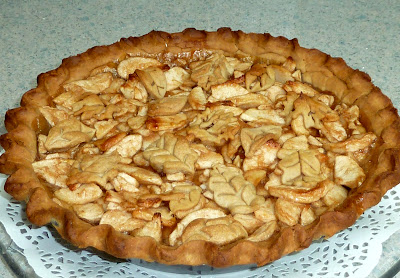 Apple pie is a favorite in our family.  In the USA it is made for Thanksgiving and all year round for that matter, but is most popular in the autumn.
I learned to make pie from the Betty Crocker’s Pie and Pastry Cookbook when I was a teenager.  My mother was not a baker so I learned many things from books or friends.  My grandmothers were bakers, but by the time I was in my teens and interested in learning to bake, they had passed away.
The basic piecrust recipe from the Betty Crocker cookbook works well with GF flours if a little xanthan gum is also added.
Apple pie can be made with butter, non-dairy margarine, non-hydrogenated shortening or any combination of those three ingredients.  Usually the crust is not sweetened, but you can add a tablespoon of sugar if you like when making desserts.  Sometimes cinnamon can also be added to the crust for sweet desserts.  When making savory pies other herbs can be added to the crust.
*I prefer to use McIntosh, Stayman or Winesap apples in apple pies. Do not use Red Delicious apples, as they are too mealy.  Other apples that are good for pies include, Golden Delicious, Rome Beauty and Northern Spy.  Some tarter apples that are good for pies (but will require a lot more sugar to be used) include, Granny Smith, Baldwin, Jonathan, York Imperial and Rhode Island Green.  Crisp apples that get soft when baked are best in apple pies.  Some apples taste great, but never get soft no matter how long they are baked and the pie will not have the right melt-in-your-mouth texture.
To make a sugar free version I mix apples with cinnamon, raisins and chopped dates to taste, depending on the sweetness of the apples.  I also use an unsweetened crust.
Usually apple pies have a top and bottom crust.  I made this one with leaf shaped piecrust cutouts scattered on the top.  There is also crumb and lattice topped apple pies.  Lattice crusts are made with strips of dough that are woven by crossing the strips over each other across the top of the pie. Lattice tops are difficult with GF crusts as GF piecrust dough is wetter then regular dough and trickier to weave into a lattice shape.
I love to make the crust in the food processor.  You can use ice-cold butter and, with a few pulses and no effort, the flour is mixed in without warming it up, thus keeping the piecrust very crisp and tender.
Apples cook down during baking, so always make sure that the apples make a small mound higher than the edges of the pie.   If you start with a convex shaped top crust you end up with a flat top.  If you start with apples piled level with the pie edges the result will be a concave pie top. 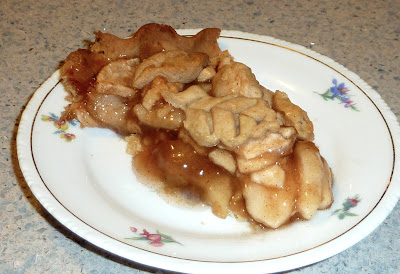 Directions
In a small bowl add the flours, salt, xanthan or guar gum and sugar, if using, and mix together with a whisk until well blended.
If using a food processor: place butter, margarine or shortening to the bowl of the machine, add flour mixture and pulse several times until the mixture resembles coarse sand.  Add 3 Tbs. of cold water and pulse a few times until mixture is moistened.
If using a pastry blender: place butter, margarine or shortening into a bowl, add flour mixture and with a pastry blender cut the butter, margarine or shortening together until all the flour is coated and the mixture resembles coarse sand.  Add 3 Tbs. of cold water and stir in with a fork until mixture is moistened and stays together.
Gluten free dough is sticky and using wax paper makes it easier to roll it out, handle it and move it into the pie pan. Place the dough onto a piece of wax paper and gather together into a ball.   Flatten the ball of dough out slightly with your hand and then cover it with another piece of wax paper.
Use a rolling pin to roll out the dough between the two pieces of wax paper.  Roll into a round about ¼ inch thick.
Peel off top piece of wax paper.  Hold the wax paper side of dough and, centering it over the pie pan, place the exposed dough side into the pie pan.
With the wax paper still on, gently press the dough into the bottom of the pan.  Peel part of the top piece of wax paper back, and press and smooth out the dough on the side of the pan.  Continue to press the dough and peel back the wax paper until the dough is even around the inside of the pie pan and the wax paper is completely peeled away.
Usually a pie pan has a flat edge around the rim that allows you to form an edge. I used a deep-dish pan without a flat rim, so I had to build up an edge with dough to form the crust.
Crimp the edge by gently pressing the dough with one finger of one hand between the two fingers of the other hand that is holding the dough (see photo).  Place piecrust into refrigerator until ready to fill and bake. The colder the dough the flakier the crust will be.
Take the left over dough and roll it out between the wax paper and cut shapes out with cookie cutters dipped into GF flour.  Place the sheet of dough with the cutouts in the refrigerator until the pie is filled.   These shapes will be used on top of the pie instead of a traditional top crust. When the dough is cold and hard the cutouts can be easily removed and placed on the pie.
Preheat oven to 425 degrees.
Peel core and slice apples.  Add half the sugar, flour, spices & salt, and mix well.  Taste an apple and add as much of remaining sugar as per your taste.  If not sweet enough add additional sugar to taste.
Pour apple mixture into the prepared crust.  If desired, dot filling with the 3 tablespoons of butter or margarine.
Place dough cutouts randomly on top of the apple filling in the piecrust.
Cover edges of crust with foil or pie crust shield and bake for 40-50 minutes.  Remove foil for last 15 minutes of baking. Pie is done when crust is nicely browned, the filling is bubbling and the apples are soft.