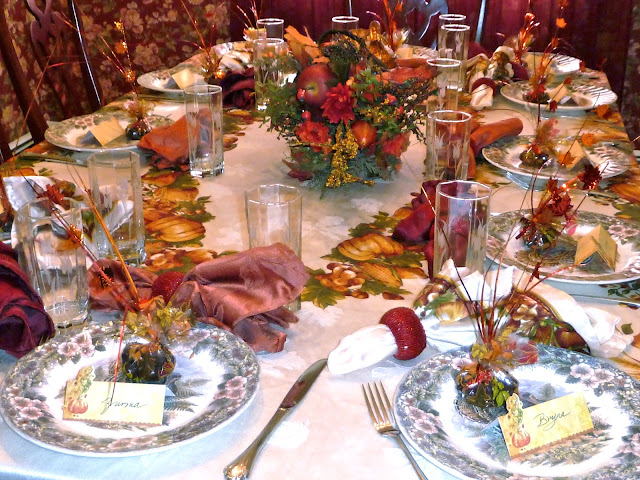 Posted by Bryna Bear aka Gluten Free Baking Bear
(I just wanted to explain that I thought that I posted this last month, but it was left in 'Draft' form by accident.  I only realized this today when I wanted to look up the recipe for the pumpkin biscuits and the link stated that the URL was not available.  I am truly sorry that this happened.  I was so proud of myself for getting that post up despite all the stress of Sandy and the holidays, but evidently I was not doing as well as I thought.)
This year Thanksgiving caught me by surprise; I was expecting it to arrive a week later than it actually did.   Hurricane Sandy caused two weeks of time to just disappear. My sister was visiting from California and endured the storm with us.  No power for four days and then she got her flight back just before the next storm came.  Two friends, whose home was flooded with almost four feet of water and mud, have been staying with us for a few weeks until their temporary apartment is ready.  Their home will take at least six months to repair.
The Jersey Shore area was hit very hard. We were some of the lucky ones with no water or property damage and we got our power back in only four days.  Many people still have no power and many had none for two weeks.  We lucky folks served as warming and charging stations, let others do their wash in our home and served up hot meals with movie nights.  After a needed recharge of body, spirit and phones people rushed home before the curfew.
I am so thankful for family, friends and all the love and blessings in my life.
With a thankful heart I made a Thanksgiving dinner for twelve. My son is vegan and, quite a few years ago, I gave up doing things two ways: vegan and with egg/dairy.  Now holiday meals are Vegan except for the meat and there is a vegetarian ‘meat’ dish.
I love to set the table and I do get a bit Martha Stewart-ish about this.  I usually set the table days before the holiday, since I get quite busy cooking and baking.
My new trick to lowering stress and work around holidays is to make dough for cookies and/or biscuits ahead and freezing the scooped out raw dough in portions that are ready to bake the day of the holiday.  I will also pre-make cupcakes, bake, fill, frost and freeze them and then thaw them out an hour before serving.  This pre-making and baking can be done at least a week ahead of time.
My recipes are old family favorites that I converted to gluten free and vegan.  This years menu: Turkey; vegetarian ‘turkey’; mushroom gravy; chestnut stuffing; cranberry pear chutney; jellied cranberry sauce; sweet potato casserole with marshmallows; twice baked potatoes; roasted broccoli; roasted cauliflower; Brussel sprouts; pumpkin biscuits, dill biscuits and vegan macaroni and cheese from the wonderful vegan Cinnamon Snail (The only non-GF part of the meal).  Dessert:  apple pie; banana oatmeal chocolate chip cookies; pumpkin cheesecake cupcakes (recipe has been updated with a vegan pumpkin cake version); chocolate pumpkin spice cupcakes and store made chocolate truffles.
Some of the holiday recipes, I had already posted.  I forgot to take photos of many of the dishes, as I was so engrossed in making and serving the meal. 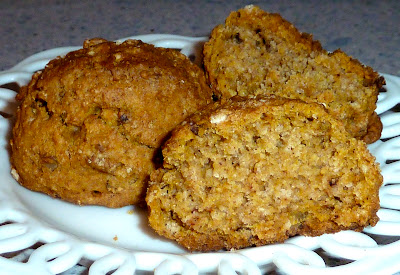 The Pumpkin Biscuit recipe came from a magazine, I do not know which one.  I got it before the days that one could surf the Internet and find recipes.  In the old days, if you liked what someone made, you would ask for their recipes and write them down on recipe cards. You usually did not know where the recipe originated.  I also used to cut out recipes from magazines and then rewrite the ones I tried and liked onto recipe cards, never thinking it important to note the magazine name or the date.
These biscuits are light, flavorful, slightly sweet and addictive.  They are best served warm and are good plain or with butter or margarine.

Directions
Preheat oven to 425 degrees.  Line baking sheets with silpat or parchment paper.
In a bowl add the flours, xanthan or guar gum, cinnamon & salt and mix with a whisk until well blended.
In the bowl of a food processor add flour mixture and butter or margarine/shortening and pulse until mixture is like coarse wet sand (my favorite way).  If not using a food processor: in the same bowl as you mixed the flours, add butter or margarine/shortening and cut in with a pastry blender or two knives until all the flour is coated with the fat and the mixture resembles coarse wet sand.

If using a food processor add flour mixture to a bowl and then follow the instructions.  In the bowl, form a well in the flour mixture and, all at once, add cream or milk (regular or non-dairy), canned pumpkin and pecans.  Stir with a fork until just combined and all the flour is moistened.  Do not over mix at this point or the biscuit will be hard and tough.

Using a scoop that measures 2-inches in diameter scoop the batter out 2-inches apart on prepared cookie sheets.  To make and store them to use at a later time, leave the biscuits on the baking sheets and place in the freezer until the biscuits are hard and then transfer them to a plastic baggie and store in the freezer.  No need to thaw them before baking just put the frozen biscuits on prepared baking sheets and bake in the preheated oven.

Bake about 20 minutes or until golden brown.  Frozen biscuits might take a few more minutes. 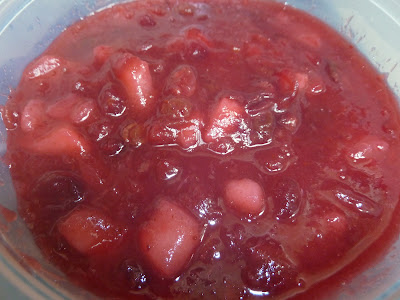 The Cranberry Chutney recipe was one my sister-in-law found in a magazine.  This chutney is just sweet enough and adds a deliciously different and sophisticated twist to cranberry sauce.

Directions
Bring water and sugar to a boil and add the cranberries.  Cook about 8 minutes until berries break. Stir often.

Add diced pears and cook another 10 minutes until the pears are red.  Stir often.

It tastes better if made at least one day ahead. Can be made up to 3 days ahead. 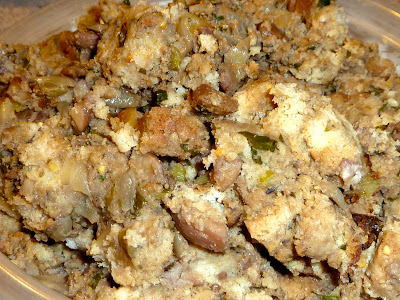 This stuffing is the one that my mother used to make every Thanksgiving, sort of.  She used packaged and seasoned bread cubes and this recipe calls for home made GF bread cubes and adding your own seasonings.
GLUTEN FREE CHESTNUT STUFFING

Ingredients
*Just a word about bouillon cubes.  Always read the labels.  Some contain wheat, barley etc. Also watch out for hydrogenated oils.
Directions
Preheat oven to 350 degrees.
Cut slices of bread into ¼ - ½ - inch cubes and spread out in one layer onto baking sheets.
Bake about 40 minutes, stirring pieces every 10 minutes, until the bread is dry and firm.  Do not toast until dark.  Bread should be pale to lightly golden.
Let cool and store in plastic bags until ready to make the stuffing.  The bread cubes can be made up to a week in advance.
Stuffing can be made a day ahead and kept in the refrigerator.  When ready to make stuffing.  Preheat the oven to 375 degrees.  Grease a ceramic or glass baking dish that holds about 12 cups.
Sauté onions, celery and garlic until softened.
In a large bowl or pot place bread cubes, cooked vegetables, herbs, and seasonings.  Toss until well mixed.
Add liquid and ¼ cup oil and mix.  Let sit 10 minutes to allow the bread to absorb the liquid.  Add more liquid if stuffing is too dry.  Take care not to add too much liquid or the stuffing will be gummy.
Break up the chestnut meats into large pieces and add to the bread mixture.  Gently mix the nutmeats into the stuffing.
Place stuffing into the prepared baking dish and bake for 30-40 minutes until the stuffing is heated through and the top is lightly browned. 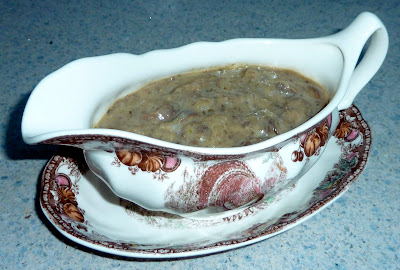 My mother used to make gravy from cans of Campbell’s Cream of Mushroom soup and giblets.  A creamy gravy is not that common or traditional, but, thanks to my Mom, this is my preferred type of Thanksgiving gravy.  Of course, now I make it from scratch and gluten free.  It is easily done vegan by using non-dairy milk and using extra veggies instead of giblets to boost the flavor.

Directions
In a large saucepan heat the oil, add the flour and stir a few minutes until the flour begins to turn golden and fragrant.
Add the milk and stir into the flour mixture with a whisk until smooth and well blended.  Cook until slightly thickened than add the rest of the ingredients and simmer for 40-60 minutes.  Adjust seasonings before serving.

This recipe was one I found on-line a few years ago.  It is not Thanksgiving for my daughter-in-law without this casserole.  This recipe is not too sweet and is fast becoming a family favorite.
This is one of the recipes I do not have a photo for YET.  I promise to post one as soon as I make it again.  Here is a link to a photo that looks like this will look when done.
SWEET POTATO CASSEROLE WITH PINEAPPLE AND MARSHMALLOWS

Directions
Preheat oven to 400 degrees.  Grease a 2 ½ quart baking dish.
Clean and cut slits into the sweet potatoes/yams and place on a baking sheet (juice oozes out during baking and you do not want to clean this off of the bottom of the oven).  Bake about 45-60 minutes or until tender.  Allow potatoes to cool and then peel and cut them into bite-sized pieces. 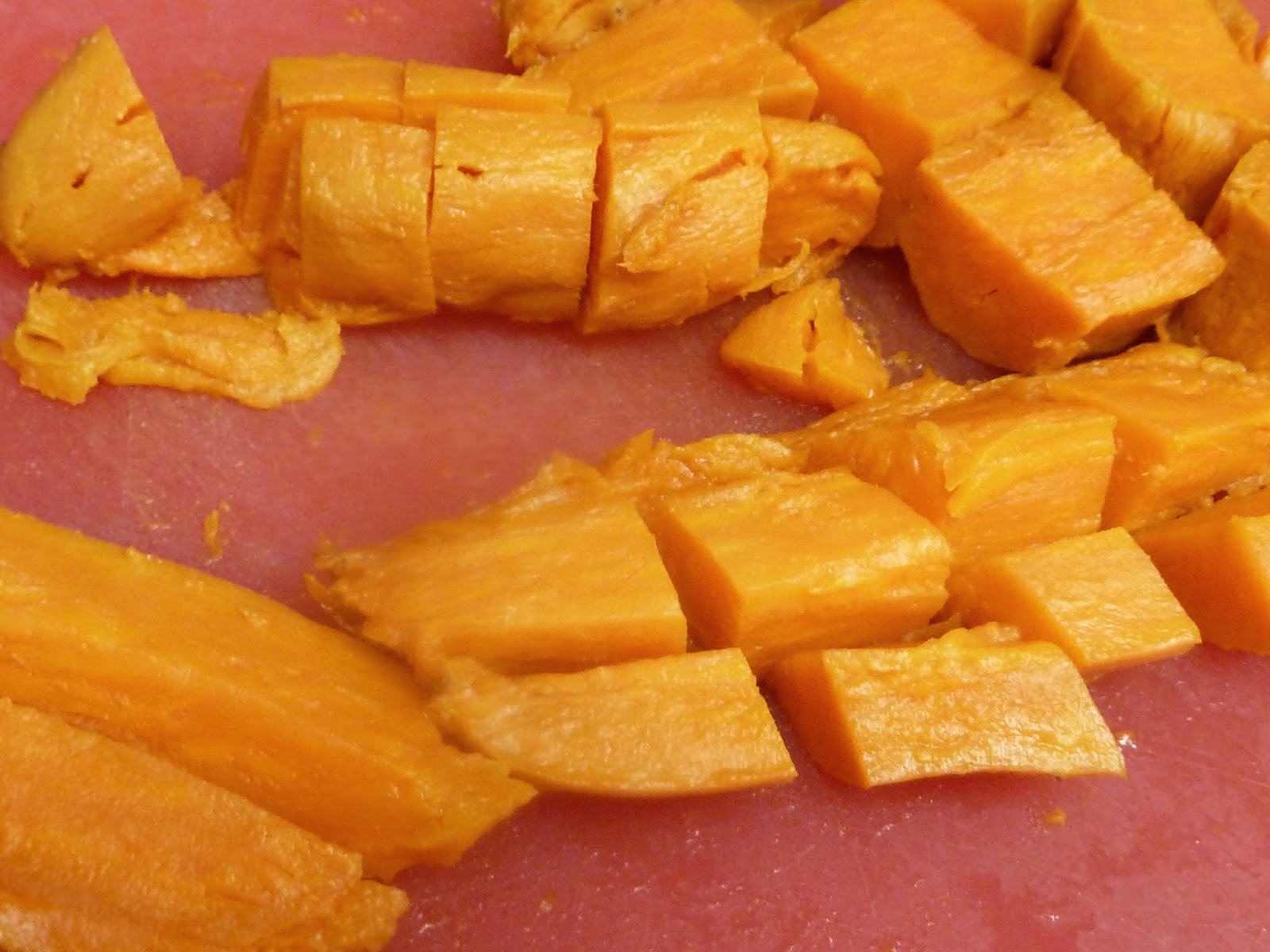 Reduce oven temperature to 350 degrees.
Place the potatoes in a large bowl.  Add the pineapple, cinnamon, raisins and melted butter or margarine.  Toss until potatoes are well coated and ingredients are evenly distributed.
Put potato mixture into the prepared casserole dish.  Cover with the marshmallows.  Bake for 35-40 minutes or until the potatoes are bubbly and the top is lightly browned. If the marshmallows begin to get too brown, cover the casserole by loosely placing aluminum foil on top during the last 10 minutes of baking.
Serve hot or warm.
This dish can be prepared a day ahead.  After the potatoes are in the casserole dish cover and refrigerate.  The next day cover with the marshmallows before baking as directed above.